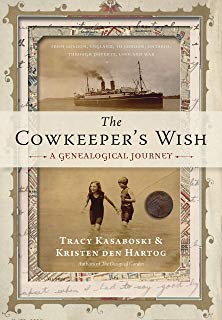 
Knowing nothing about cows and dairy management, I wasn’t quite sure to what extent I would find this book of interest but, from the very first page, I was completely hooked and followed with great fascination this tale of a family against the backdrop of Victorian and Edwardian London.

Without wanting to give too much away, as I am sure that you, like me, will not want to put the book down once you have started reading it, it starts with Benjamin Jones and his wife walking (yes, walking, like most people had to back then) all the way from their home village in Wales to go and settle in south London with their herd of cows in the hope of finding a better life than their impoverished, rural home could provide.

It is fascinating to read about the social conditions of the world’s biggest metropolis at that time and of the hardships that most normal people faced. As we follow the Jones family’s progress through the generations, the book gives a huge amount of background information into the workings of the Poor Laws, Workhouses, pre NHS hospitals and mental asylums, chronicling the improvements in housing and gradual social changes that took place.

For the most part, each chapter focuses on a particular family member or branch and looks at what happened to them and what their surroundings were like over a period of time.

Now, I have done a little research into my own family, and can attest to how difficult it is, even with modern research methods, to take ancestors and find correct information about them and their circumstances. I can only say that the authors here have done such a lot of research, not just on line and in Censuses, but physically visiting places and checking local sources that this book really is a masterpiece of research and narrative. You feel that you know the various family members as you meet them and you are concerned about what happens to them. Unfortunately not all of the stories are happy ones – we have people regularly entering the Workhouse and mental asylums, children whose parents have died and left them orphans and even people who perished on the RMS "Titanic".

There is mention of Jack the Ripper and also Charlie Chaplin but I will let you get your own copy of the book so you can find out how they figure in the story.

I found an area of particularly personal interest later on in the book, where some of the people originated in Belvedere, Kent, UK, which was where my own Grandfather’s family also came from. It was interesting for me to read about the pre-First World War places that my Grandfather’s family would have recognised.

For people who are interested in the First World War, there is an interesting section where one of the family members joins the British Royal Navy and narrowly survives after his ship was sunk. Experiences on the Home Front are also described, when the Capital City started to sustain raids by German bombers and family members were moved to the safer suburbs. There is also a particularly interesting piece about the Silvertown Munitions Factory explosion.

While starting off in London, England, the focus of the book ends up in London, Ontario (Canada). Here again, I have a family interest as some of my relatives emigrated to Canada in the early part of the 20th Century, albeit not to Ontario. Once we get to London, Ontario, the deaths, disease and squalor are less prominently featured in the book than they were in London, England and the latter parts of the story are, for the most part, quite cheerful and positive.

It is a very sizeable book at 448 pages in length and the two authors have done a wonderful job in setting out so many facts in a highly entertaining and readable way.

As I have said already, I really enjoyed reading this book – the amount of details the author have gone into is incredible and I have learnt all sorts of things that I did not know about.

I do, however, have one small criticism and while I don’t wish to criticise such a well-produced publication, this has irked me throughout my reading of the book, so I feel it needs highlighting.

They say a picture can paint a thousand words and while this book has some really interesting photos of the various family members, there are whole passages of text devoted to describing other photos which are not included in the book and the authors go into great detail describing the people in the photos, what they are wearing, what their expressions are like and what their surroundings are like and I found myself asking again and again "where is this photo and why haven’t you put it in the book?"

The photo of the group of college staff taken on the roof of the building with views looking out across old time London would have been fascinating to be able to see, as would the cheerful photo of teenage Doris and her Baseball Team at her school in Canada. I am sure the authors had very good reasons for not including these and the many other photos they describe in depth in the book, but it does leave the reader wishing they had.

Having said that, the book overall is a fascinating read, telling far more than just the story of one family and I am certain it will be of great interest to people interested in many different subject areas.