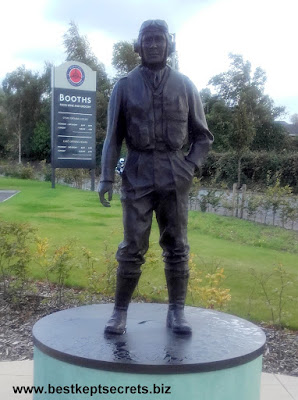 Hats off to Booths Supermarkets! Their stores are wonderful but the store in Burscough, Lancashire (near Ormskirk, between Preston and Liverpool) is truly amazing because it has been specially constructed to commemorate a Second World War Royal Naval Air Station – H.M.S. Ringtail.   The Fleet Air Arm air field was commissioned on 1st September 1943 and had four runways, a three-storey control tower, 34 hangars and Nissen huts to accommodate personnel.

The last flying unit left Burscough in 1946 and the Royal Navy gave up the Station in 1957. The area reverted to agricultural use until 2014 when work began on a new retail park which is called Ringtail Retail Park to commemorate the WW2 use.
Booths, a supermarket chain which is family-run and situated in the north west of the UK, had their flagship in Burscough store specially designed and built to resemble a WW2 Hangar.  The delightful café in the store has an HMS Ringtail theme with large photographs on the walls of the RN personnel at work during WW2.  A monument placed on the site in 2004 has been moved to a new location in a specially commissioned memorial garden outside the café.  This has been enhanced by the addition of a full-sized bronze sculpture of a Second World War Royal Naval Fleet Air Arm pilot and this was re-dedicated in a ceremony in October 2015.
Lawrence Critchley, a local historian who we were fortunate to meet on our last visit to the store, has produced information leaflets about the venture which are available in the café.  Lawrence has also set up a website www.hms-ringtail.org.uk and organised a Facebook Group – HMS Ringtail, RNAS Bursough https://www.facebook.com/groups/163580260324697/
Booths’ Burscough store also has collection boxes for the Navy Wings Supporters Club initiative, set up to keep the memory of Britain’s historic naval aircraft – see www.navywings.org.uk
For more information about the Booths Store in Burscough – well worth going out of your way to visit – see http://www.booths.co.uk/store/burscough/
Booths Supermarkets Ltd.
Unit 1
Ringtail Retail Park
Burscough
Ormskirk
Lancashire
L40 8AD (for Sat Nav Please Use L40 7SS)

We were lucky enough to be invited to the opening a fascinating exhibition at Liverpool Central Library about Merseyside writer and poet Richard Le Gallienne.

Timed specially to commemorate the 150th Anniversary of the birth of Richard Le Gallienne in West Derby, Liverpool, the exhibition has been co-curated by Dr. Margaret Stetz, who is Mae and Robert Carter Professor of Women's Studies and Professor of Humanities at the University of Delaware, and Mark Samuels Lasner, Senior Research Fellow at the University of Delaware Library.

Running until 31st October 2016, the exhibition in the Hornby Library of Liverpool Central Library, has on display some rare items highlighting the life-long connection of Richard Le Gallienne to Oscar Wilde.  Drawing on original photographs, drawings, manuscripts, unpublished letters, Victorian magazines and first editions here you will find Richard's story as he goes from Merseyside to America via London.   Taken from private and public collections and local institutions such as the Liverpool Record Office, the material on show demonstrates the importance of Richard Le Gallienne in the literary scene of the late Victorian era.  The setting of the magnificent Hornby Library in Liverpool Central Library enhances the exhibition.

You can hear what Lucy had to say about Richard Le Gallienne and the exhibition clicking on the sound file below:


Photo Courtesy of www.liverpoolexpress.co.uk
Posted by Paul & Lucy at 03:04