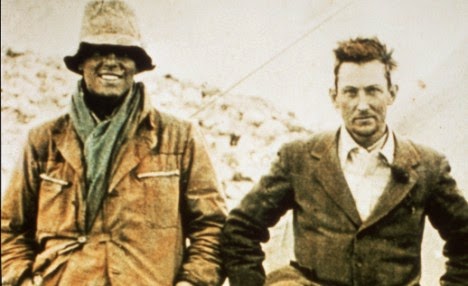 A multi-media E-book telling the story of iconic Everest mountaineers George Mallory and Sandy Irvine has been published in aid of victims of the Nepal earthquake which also claimed the lives of several climbers on Mount Everest.
Ice Picks and Violets is available on Kindle, and along with the story's text, it features links to an audio narration and songs and video, making it one of the first digital mixed media books.
Based on the new stage production of the same name, all royalties will be given in aid of the Community Action Nepal's Earthquake Appeal set up by mountaineer Doug Scott, the first ever Brit to summit Mount Everest, and a champion of theHimalayan people. He will be providing narration to the show later this year.
Ice Picks and Violets writer Dean Johnson says, “I have been speaking to Doug about the project, and he has been very supportive and hopes to be involved. Now that this terrible disaster has struck in the heart of the Everest region, I felt it appropriate to doing anything I could to help.”
There will be readings and music from the book, plus refreshments when it is launched at 3pm on Monday 11th May at The Wilfred Owen Story Museum, Birkenhead. Entrance is by way of a donation of any amount to the CAN Earthquake Fund.
For more information on Community Action Nepal, go to http://www.canepal.org.uk/
Ice Picks and Violets is available via Kindle.
Monday 11th May 2015 – 3pm
The Wilfred Owen Story
34 Argyle Street
Birkenhead
CH41 6AE
For more information, contact Dean Johnson – 07539 371925
icepicksandviolets@gmail.com.
Photo:  Mallory and Irvine
Posted by Paul & Lucy at 14:23 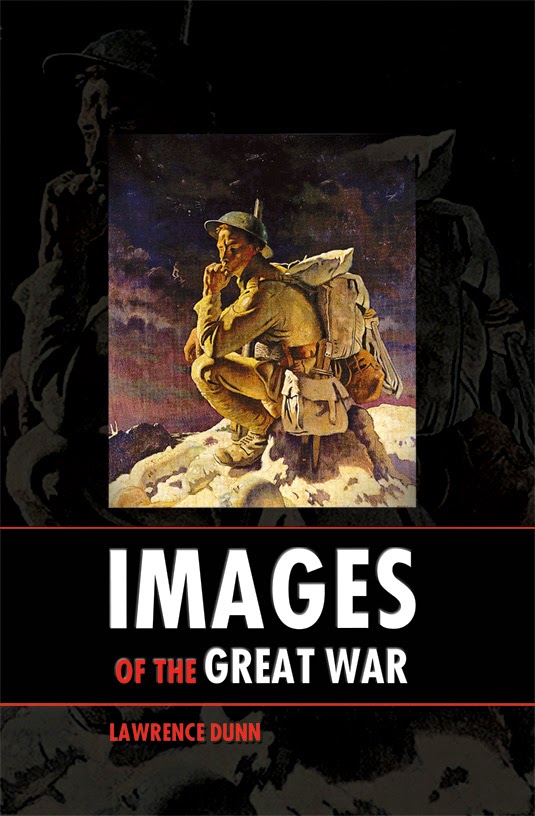 Lawrence Dunn, an artist from Sunderland, guides us through a brief history of the First World War featuring a selection of images by some of the British and Empire artists, cartoonists, poets, photographers and sculptors of the time -  paintings, drawings, illustrations and photographs, many of which are from the author's own collection.  With the skill that only an artist has, Lawrence encourages us to have a closer look at some of those works and in so doing brings the conflict to life as never before. In many instances, Lawrence also invites the reader to compare the styles of artists who have painted the same view or person.
I thoroughly enjoyed reading this book.  I already knew some of the names that Lawrence has included but there were many that were new to me.  I was interested to see that Lawrence has dedicated the book to his second cousin, Corporal Michael Davison of the Northumberland Fusiliers (1st Tyneside Irish).  Michael was an underground putter at Ryhope Colliery when he enlisted in 1914 and was killed on the first day of the Battle of Arras - Easter Monday, 9th April 1917.  My great-uncle James Yule was a Private in the Northumberland Fusiliers, 23rd (Tyneside Scottish) Battalion and he too was killed on 9th April 1917, as were the poets R.E. Vernède and Edward Thomas,
Beginning with Lady Elizabeth Butler, both male and female WW1 artists of all disciplines are represented in the book - Sir David Muirhead Bone, Francis Edgar Dodd, Sir William Orpen, Charles Sergeant Jagger, Christopher R.W. Nevinson, Paul and John Nash, Bruce Bairnsfather, Arthur Leonard Smith, Wyndham Lewis, David Bomberg, William Patrick Roberts, Colin Unwin Gill, Harold Sandys Williamson, Augustus Edwin John, John Singer Sargent, Henry Tonks, James Francis Hurley OBE, Olive Edis, Eric Henri Kennington, George Clausen, Sir John Lavery, Austin Osman Spare, Gilbert Rogers MBE, Adrian Ketih Graham Hill, Sir Jacob Epstein, Mark Gertler, Joyce Dennys, Olive Mudie-Cooke, Flora Lion, Anna Airy, Lucy Kemp-Welch, Norah Neilson-Gray, Clare Atwood, Dorothy Josephine Coke, Frederick Horseman Varley, Stanley Spencer, David Michael Jones, Robert Doublas Strachan.
But this book is not just about the artists and the pictures of WW1, Lawrence goes into detail about some of the battles and includes personal stories about the artists and the areas and subjects depicted.   On page 137 you will find paintings by the artist William Patrick Roberts, who was at the Battle of Arras on 9th April 1917 and is therefore of special interest to me.
Lawrence has also included poems by both male and female poets - Laurence Binyon, Rupert Brooke, Beatrix Brice Miller, Jessie Pope, John McCrae, Lucy Foster Whitmell, Charles Sorley, Alan Seeger, Vera Brittain, Thomas Kettle, Lady Margaret Sackville, Isaac Rosenberg, Siegfried Sassoon, Francis Ledwidge, Wilfred Owen, Robert Graves, Iris Tree, Winifred Mabel Letts, May Wedderburn Cannan, Anna Gordon Keown, Alice Meynell, Katharine Tynan, Elinor Jenkins, Muriel Elsie Graham, Edmund Blunden, May Hershel-Clarke, Mary H.J. Henderson, Eileen Newton, Emily Orr, Doprothy Una Ratcliffe, Edward Thomas.
I also very much enjoyed reading about the photographs taken during the First World War in the section about James Francis Hurley OBE, a photographer from Sydney, Australia.   Lawrence explains that many of the photographs taken during the 1914 - 1919 period were not fake but 'composites' as photographers were still experimenting with the medium.
With a map of the Western Front showing some of the worst battles of the war, a comprehensive Index and Bibliography and a final poem written by the UK's current Poet Laureate, Dame Carol Ann Duffy, this is a superb book which I would highly recommend.
Posted by Paul & Lucy at 08:35

In short, a place to meet old and new friends, chat, bag a bargain and have some fun and raise some funds for Jaspers. Everybody welcome. parking available.
For further information about Jasper's Alley Cats, the charity that helps the alley cats of Southport http://s525666395.initial-website.co.uk/about-us/
http://www.southportvisiter.co.uk/whats-on/whats-on-news/22-superb-family-days-out-9098355
Posted by Paul & Lucy at 07:22

Hearing Rae Morris sing live on the Chris Evans Breakfast Show on BBC Radio 2 this morning  took us right back to when we first saw her sing live – doing a guest spot at the “Parks” Art Deco café in Blackpool’s Stanley Park at one of their Sunday lunchtime swing sessions in 2010.

She was back there again in September of that same year playing at the café’s coffee morning in aid of the Macmillan cancer charity and, once again, she made a huge impression on everybody who heard her perform that day.

In this modern day and age where names can be made or broken on the fickle judgements of TV “experts”, and five minute wonders come and go in – well - five minutes, actually… it is especially gratifying to see that a young singer songwriter can still make their way in the music business persevering with their own excellent material and working their way up round the various festivals and other opportunities that come along.

By the time that Rae performed at the Blackpool Fashion Show in February 2011,   she was already very much on the up as a star and we were very pleased to be able to feature some of her early recordings in our “Lancashire Songwriters” Showcase programmes on 103.2 Preston FM.
One of the most striking things about her when you meet her is how small she is in build  – except for her hair, that is - and how quietly spoken and unassuming she is.  However, once she starts to sing, the most amazing powerful sounds come out of that small person and she really is incredible to listen to. It is great to see that this Blackpool-born songwriting talent has enjoyed so much success in these intervening years.
Since then she has done it all – Jools Holland, Glastonbury, the Burberry adverts, numerous national radio appearances and recently – a colour glossy spread in “You” magazine. Then her debut album on Atlantic records “Unguarded” broke into the top 10 of the album charts.
She is now embarking on a European tour and is set to headline at the Lytham Festival in August as well as appearing at the Liverpool International Music Festival.
You can find out more about Rae’s music and all her latest news on her website at  www.raemorris.co.uk  where there are also sales links to buy her “Unguarded” album.
Early Rae Morris news items here on “Best Kept Secrets”:
http://www.bestkeptsecrets.biz/2011/02/blackpool-fashion-show-at-winter.html
http://www.bestkeptsecrets.biz/2010/09/macmillan-coffee-morning-at-art-deco.html
http://www.bestkeptsecrets.biz/2011/02/sara-creeney-visits-preston-fm.html
http://www.bestkeptsecrets.biz/2011/02/blackpool-charity-fashion-show-winter.html